Pitch and Putt was born in April 1914, in England, more precisely in Portsmouth, with the opening of the Southsea Golf Links.
This first public course, with 9 short par 3 (between 50 and 91 meters) is undoubtedly the “cradle” of the P&P as we know it today, although at the time, this modality was still known as “Miniature Golf”. This course is still very popular and is owned by the ‘Portsmouth City Council’.

During the 1920s and 1930s, between the two Great Wars, P&P courses spread throughout England, usually near seaside resorts on the English coast, primarily for the entertainment of
vacationers who were not golfers,when the typical gloomy English summer, did not give them a good beach day.
Simultaneously, in these same areas, golf enthusiasts come to build small replicas of the large fields, to satisfy their desire to play, during the holiday period.

Unfortunately, this seasonal coexistence of non-golfer golfers (perhaps because of the lack of etiquette of occasional golfers) led to the general disinterest of golfers over Pitch and Putt, making that P&P and their courses in England, were no longer taken seriously.

The first documented record in the United States of America on the construction of a Pitch & Putt course dates back to 1930, three years after the construction of a park for middle-class workers in 1927 by the visionary Robert Moses . He decided to create an 18 Hole P&P course in Long Island, New York, the Jones Beach Pitch & Putt, which still exists today and keeps it going.

With the golf boom in the United States at the beginning of the last century, several Golf Resorts have begun to build shorter, smaller golf courses near their golf courses to attract tourists. Also, wealthy landowners began building Pitch and Putt courses on their properties on the west coast (especially in Hollywood) and parts of Florida.
With traditional golf more and more organized and developed, smaller courses were seen as a fad, and slowly Pitch & Putt was falling in the US.

In Canada, and although no exact date is known, it is thought that it was in the early 1930s that Pitch & Putt began its activity. It is known, however, that one of the oldest courses, if not the oldest in Canada, is Stanley Park’s Pitch & Putt in Vancouver, which opened in 1932 and is still very active today.

However, there is a year and a country for the history of Pitch and Putt: 1937 in Ireland.
It was in this year that Pitch & Putt began to have sustained and organized development at an institutional level.
The credit is given to W.A.Collins, then Manager of the National Bank in Cork. Fountainstown is a small village on the shores of Cork Bay, about 10 kms from the city of Cork and was, at that time, a popular holiday destination.
That year, Fountainstown Sports Club had facilities for various sports, including an 18-hole Putting Green. The large number of members who were constantly using Putting Green suggested to W.A.Collins the idea of ​​building a 9-hole Pitch & Putt course.
Thus was born in the middle of 1937 the first field of Pitch & Putt in Ireland – Fountainstown Pitch & Putt Club.

The advent of World War II, in 1939, inevitably meant travel restrictions and rationing. With strong military requirements in steel and rubber, golf clubs and golf balls were scarce during and after the war. In this climate, the short game flourished.
Hundreds of people of all ages benefited from Pitch & Putt at Fountainstown P&P Course and quickly P&P spread throughout the Cork region, where P&P courses were built in Tennis Clubs (Altona), in the grounds of the Sunbeam factory (Millfield) owned by an enthusiast (P.J. Bell), in the backyard of another golfer (Woodvale) and on grounds attached to an Army Barracks (Collins).

In the early 1940s, the Irish Tourist Association sent representatives on a tour of inspection of the Cork courses with a view to developing the sport at seaside and other resorts (which they quickly did at Tramore and Killarney).
Politicians spoke glowingly of the sport’s potential, owing to the small amount of land necessary for a course and that the game was in reach of the average citizen’s pocket.

In December 1944, the Irish Amateur Pitch and Putt Union was founded under
W.A.Collins Presidency, with its registered office in Cork.

PPUI from the start, has promoted the international development of P&P as well as strived to maintain contacts with the P&P courses and P&P players in the UK and other parts of the world.
As a result of this exchange of experiences, in 1989, Sean Lynch and Ron Wilson founded the Australian Pitch and Putt Association, thus transporting the Pitch & Putt to Oceania, resulting in the first Championship between Ireland and Australia in 1993.

Also in 1989, Pitch & Putt was introduced in Spain, more precisely into the province of Catalonia, where an Irishman living in Girona (Barcelona) under his name, Martin Whitelaw, built the first P&P course built on Spanish soil: the Solius P&P Course.

In the following years and due to the extraordinary welcome of the Catalans by this modality, it made that Catalonia become today one of the world powers in Pitch & Putt, with the current 42 P&P courses and more than 16.000 players, only in this spanish province!

Pitch & Putt quickly spread throughout Europe, appearing in Italy in 1998, France, Germany, Switzerland and the Netherlands in 1999, Portugal in 2001 and Norway in 2004, among others.

In March 2006, the International Pitch and Putt Federation (FIPPA) was created to be the governing body of Pitch and Putt at the international level. Representatives from 13 countries and regions from around the world are now part of this institution.
One of the main objectives of FIPPA was to make the world golfing community recognize Pitch & Putt as a totally different mode of traditional Golf, with Rules of its own.

After disagreement over membership criteria, in 2009, the representatives of France, Italy, San Marino and Denmark abandoned the FIPPA project.

On April 2, 2009 in Madrid, these same countries, France, Italy, San Marino and Denmark, together with Spain and Portugal founded the IPPA – International Pitch and Putt Association, with one federation per country, including golf federations.

Since then, many other countries have joined the IPPA, mostly through their National Golf Federations, totaling today, about 29 associate members, spread over 5 continents.

To conclude, just a rather bizarre historical note:
In Scotland in the 15th century, more precisely in 1457, Golf, along with football, is banned by the Scots Parliament of James II to preserve the skills of archery. Golf is prohibited on Sundays because it has interfered with military training for the wars against the English, and church attendance was mandatory.
Several small golf courses were then built inside the churches enclosures to circumvent the law. The holes were between 45 and 90 meters and the ball would be hit with a single stick!

Is this historical event the true genesis of Pitch & Putt? 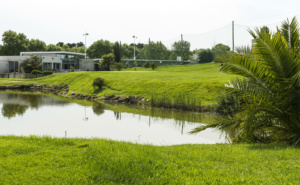